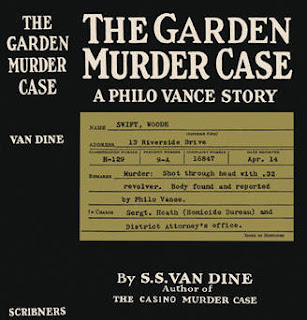 Synopsis: The Gardens live in a penthouse of a NYC skyscraper. They also own the garden area on the rooftop. They periodically have a party with their horse racing enthusiast friends, and place bets by phone while listening to the races on the radio.

Philo Vance gets a phone call tipping him off that the upcoming party bears watching. He is a slight acquaintance of the Gardens and attends the party. Woode Swift has a habit of placing large bets, then going to the rooftop garden during the race to listen to the results in solitude. Swift plunges and places $10,000 on the horse Equanimity - who loses. Moments after news of the race results are on the radio, a shot is heard from the roof. Swift is found dead. Vance takes a quick look at the body and declares it murder.

It turns out there were two successive shots: the killer shot, and a red herring shot, but which is which? The close timing of the two is critical.

During the investigation phase, nurse Bernice Beeton is discovered trapped in the "vault", a secure storage room, with a broken bottle of bromine gas intended to do her in. Vance finds her in time.

Next matriarch Martha Garden is found to have died overnight in bed, with her prescription bottle empty beside her.

Vance sets up a trap to catch the killer.

The book provides some interesting insights into the horse racing world, and the description of the gathering, placing bets and listening to results on the radio is an interesting insight into the world of the 1930's. The book follows the usual Van Dine formula of the wealthy family whose members do not trust each other. When the matriarch, Martha, announces to the family that she is some annoyed and is going to change her will the next day, you just know she won't make it though the night. (Moral: If you are going to cut someone out of your will, do it before you tell them).

The killer is unmasked in a typical Van Dine trick - nothing the police would condone these days, but back in the 1930's Van Dine's police just sat back and watched the fun; knowing in the end that Vance's vigilante justice would mean no need for a prosecution.

Side note:
I was peeved that Lowe Hammle, introduced as "fifty or thereabouts" is listed as "elderly" in the list of characters!

For a thorough synopsis and review, I invite you to see Bev Hankin's review on her blog, MY READER'S BLOCK.
Posted by Rick Mills at 4:01 AM No comments: 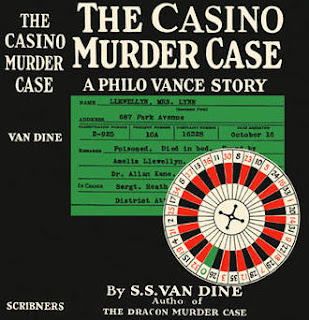 Oct 15 2020: I have intentionally misspelled the C-word in the title here, as automated bots were finding this page and posting links to gambling sites. RM
Major characters:

Synopsis: Philo Vance receives an anonymous letter indicating some harm is to come to members of the Llewellyn family and they should be watched, especially on a certain date. Vance contacts D.A. John F. X. Markham. Vance then visits Kincaid's Qasino on the indicated date, to keep an eye on Lynn Llewellyn. While gambling, Lynn collapses and a doctor immediately recognizes it as poison. No sooner is he hospitalized when word comes that his wife, Virginia Llewellyn, has died at home from poisoning.

Soon after that, Amelia Llewellyn also is poisoned, but recovers. The common thread to the poisonings is that each victim drank water just before falling ill.

This mystery is quite enjoyable for a S. S. Van Dine story. Philo Vance is more human and less pedantic than we have seen him in previous books, with none of the long, diversionary sermons on antiquities or other unrelated topics. As this is the eighth book in the series, perhaps the writer had taken some of the reviews into consideration by this point.

The plot takes on an interesting twist as suspicion is placed in one direction, and it appears the solution is at hand - but at the last moment it turns out to be a false trail. The final scene contains high tension and an alarming development as Vance unmasks the killer. 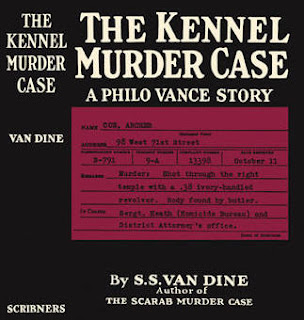 Synopsis: District Attorney John F. X. Markham is summoned to the scene of a murder, and as usual, invites his more perceptive friend Philo Vance along. At the residence of Archer Coe, they find he is apparently dead in a locked room - they can see him sprawled through the keyhole. They break in to find he has been shot. The medical examiner arrives, and finds Coe was dead long before he was shot, adding another mystery.

During the investigation an injured Scottie dog is discovered in the house, and no one recognizes it, or knows how it got in. There is also evidence a valuable Chinese vase has been broken, and an inferior piece substituted in its place. A search is started for Coe's brother, Brisbane Coe, who was in the house when all this happened. Eventually he is found - dead - in a closet in the home.

The Scottie dog seems to be the key. If they can trace the dog and find its owner, some light can be shed on the murders.

Despite the title, the book does not have any connection to a kennel, other than a brief visit to one late in the book. This is a locked-room mystery with a pile of loose ends: a victim who was dead before he was shot, a brother also murdered, a mystery dog injured, a broken vase, a missing weapon.

While delving into the worlds of ancient Chinese ceramics as well as dog breeding, the reader need not be knowledgable of either to enjoy the book. These side topics are minor. The big mystery is why and how is a dead man shot inside a locked room. The rundown of clues is standard police procedure and leads to the solution.

The book includes the usual S. S. Van Dine lectures and footnotes on obscure topics which may be skipped over. Was he being paid by the word? 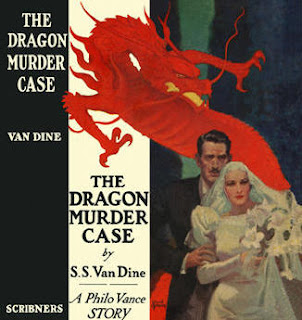