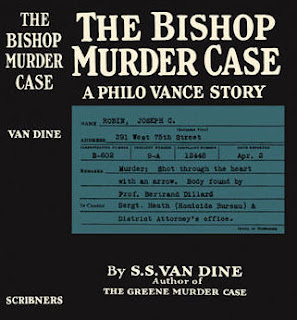 Synopsis: Philo Vance and D. A. Markham are called out to a report of murder on a long narrow archery range, sandwiched between the Dillard home and the Drukker home. The deceased is J. Cochrane "Cock" Robin, and immediate suspicion falls on Raymond Sperling who was present. It is noted that "Sperling" means "sparrow", and the murder follows the nursery rhyme of "Who killed Cock Robin?"

The Dillard house and the Drukker house back up to one another. Professor Dillard lives with his daughter Belle (here is a love triangle, both Sigurd Arnesson and John Pardee enamored of her). Adolph Drukker is a strange sort who spends his days playing with the neighborhood kids, and lives with his mother who may have seen the murder.

Other murders follow, with nursery rhyme tie-ins. After each, a note is sent to the newspapers signed "The Bishop".

The book is heavy with higher mathematics and chess references. still understandable even if you are neither a mathematician nor a chess player. As usual, plenty of irrelevant footnotes. Still, a good mystery with some clever twists at the end.

The description of the archery range plan in Chapter 2 cries out for the customary S. S. Van Dine crime scene map, but (in my edition at least) it does not appear until Chapter 18 (p. 241 in the spiderweb binding edition). So if you are just starting the book, check ahead to Chapter 18 for the crime scene map.