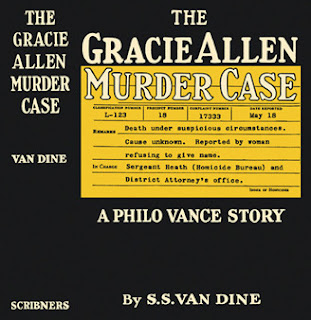 Sergeant Heath interrupts a visit of Philo Vance and John F.X. Markham with the news that Benny the Buzzard has escaped from prison. Benny had threatened Markham’s life at his sentencing trial years earlier.

Van Dine (the narrator) and Philo Vance head north of the city for an outing. While walking in the woods, Vance encounters legally-blonde Gracie Allen, and they have a long, flirtatious conversation. She reveals she works in a perfume factory with mixer George Burns and salesman Jimmy Puttle.

Later Vance is dining at a restaurant and observes Gracie Allen and Puttle at another table. Meanwhile a man sits by himself observing. Vance assumes, correctly, it is the jealous Burns. Gracie's brother, Philip Allen, works in the kitchen of the restaurant.

While the authorities are keeping their eye out for Bennie the Buzzard, a man is found dead in the restaurant's office - and is identified as Philip Allen. In his pocket is found a cigarette case belonging to Burns, who is then held on suspicion when the cause of death is found to be poison.

Despite the title, Gracie Allen is not the murder victim. She is a sweet but dim-witted woman Vance encounters in a forest clearing, and much attention is given to their repartee. The first portion of the book comprises more of a romance novel, with Gracie creating her own love triangle; using Puttle as a pawn to get Burns jealous. The middle portion has all the action, taking place at the Domdaniel Cafe, complete with secret doors and red herrings aplenty. Vance encounters the dying Owl Owen, allegedly a crime boss, but much better suited as a philosopher. They engage in a long, protracted esoteric conversation about the meaning of life, which forms the trademark S. S. Van Dine deviation to run the page count up and prevent the plot from moving along. There is a bit of unfair play with the reader regarding the dead man, but overall not a bad title; not withstanding the long complicated denouement at the finale.
Posted by Rick Mills at 7:01 AM