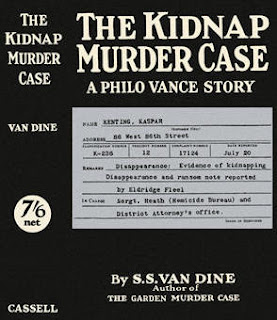 D.A. John Markham visits Philo Vance and invites him along to an investigation at the Kenting family home, known as the “Purple House”; where a kidnapping has been reported.

Kaspar Kenting appears to have been kidnapped from his room. His window is open, with a ladder found leaning against it. Initial inquiries show Kaspar had gambling debts of $50,000. A ransom note is found demanding $50,000. Is this a real kidnapping, or did Kaspar stage it to get the money from his family? Vance surmises Kaspar is already dead.

The ransom is to be left in a hollow tree in Central Park at midnight. A fake bundle of money is left in the tree and the police watch and wait. A figure comes to retrieve the money - whom I shall not reveal here.

No sooner do Vance and the family return to the Purple House when Kaspar’s wife, Madelaine Kenting, is found missing also - again from her room, with the open window, and the ladder again leaning against the house! Things happen quickly. Attorney Eldridge Fleel is shot at as he leaves the house (by a fusillade from a machine gun, yet all the bullets miss). Then Kaspar’s body is found in the East River.

More threatening notes arrive. One of them contains a clue leading to an empty building in the Bronx. Vance and Heath encounter the gang with deadly results.

The kidnapping case is full of the usual cliches: a ransom note comprised of words cut from a newspaper, and a demand to leave the ransom in a hollow tree at midnight. So far, it looks like a plot for the Hardy Boys. The odd notes are: How does one kidnap a non-cooperative full grown adult out a bedroom window and down a ladder? Why is the Homicide Bureau out in force investigating, when there is no homicide? Then, how is the kidnap victim’s wife abducted in the same manner?

Vance’s character is quite different from before. No longer content to sit back smoking and making long, rambling pedantic sermons; this Vance is out chasing kidnappers and engaging in gun battles. He disposes of the three of the gang, with the usual “Oh well, it’s for the best” response from the authorities.

Fair-play readers will take some issue with three characters not being introduced until the final denouement, as well as the breaking of Fifth Commandment of Robert Knox's Rules of Fair Play: "No Chinaman must figure in the story".

This is the last of the S. S. Van Dine novels written in the usual sequence. The following two (The Gracie Allen Murder Case and The Winter Murder Case) were reverse-written after the films were made. Please also note pejorative terms used for persons of Chinese ancestry as well as African-Americans.
Posted by Rick Mills at 12:12 PM